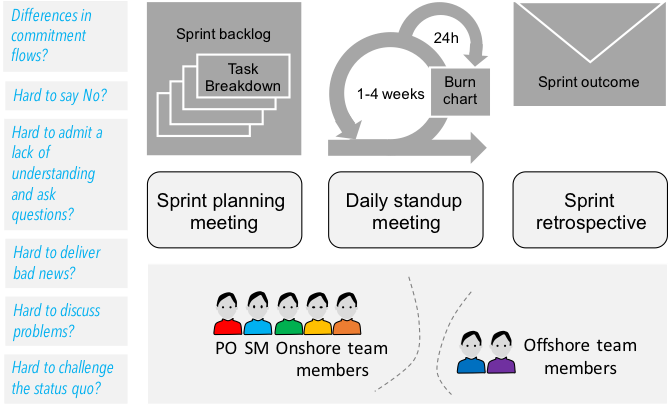 The topic of cultural differences has always interested me and I found interesting the work of Geert Hofstede who has systematized the roots of cultural differences into five dimensions. I was particularly intrigued to see that ethnic Latvians are more like Scandinavians and that Latvia culturally belongs to the Northern Europe and not Eastern Europe. At the same time, talking about culture in a work environment has always been difficult. Culture is such a “fluffy” topic, and it is so easy to blame culture. Every now and then I hear about software engineers working in distributed projects that cultural fit is a challenge, that “they” have different values, that “we” do things differently. And, to be honest, transferring the theories from the books into practical recommendations is not an easy task! The question of what does it mean in practice to have different cultures among software engineers is not straightforward. Besides, generalizing people behavior in a particular country is dangerous, since along with the national culture, there is regional, organizational, team and finally individual culture and individual differences ultimately dominate the national ones! Yet, a while ago I received a task to develop a cross-cultural awareness course for two collaboration companies from Sweden and India.

My first and the most important prerequisite was to have mixed groups instead of separate cultural groups for teaching how “they” are likely to behave. And secondly, I opted for building an understanding of how cultural differences manifest in the daily work, based on the common sources of confusions which I elicited from a group of Swedish and Indian guys from those companies.

The result turned into an interactive course that helps to diagnose the differences among the members of the group and discuss the existing behavioral differences, the wanted behavior, reasons that affect behavior rooted in culture, and the ways to overcome the differences. As a bonus, the data collected from the companies helped me to derive some conclusions and common challenges of working in an agile way in projects with high power distance and high context cultures.

If you are interested in such a course, let me know. I would be delighted to get more data points.

“Why does this applied science, which saves work and makes life easier, brings us so little happiness? The simple answer runs: because we have not yet learned to make sensible use of it” – Albert Einstein