Some time in October or November, when it was already dark, wet and cold, I decided to book a flight to Barcelona and enjoy the sunny Spanish winter at least for 10 days. The end of the year was incredibly busy and since accumulated number of working over hours at the end of 2012 accounted 200, I thought that 10 days of rest are well deserved. The end of the year I spent in Riga, and the weather was… not very Christmasy. It was around 0 till +3, mostly wet, mostly rainy but with occasional snow that instantly turned into dirt. So, no white Christmas, no fun at all. Additionally, all through the holidays I couldn’t avoid at least part time work that I was happy to finish before the year ends, leaving all old ties behind. This made the desire to escape even stronger.

I have been to Barcelona several times (one of my favorite cities), and even in December-January once, but this time, in the middle of January, it was warmer and stranger than I expected. Strange because of the contrasts. Sunny warm days, around +13 degrees on average, people walking in light jackets, and some even without. Everyone wearing sun glasses (I bought a new pair too)… (Relatively) green grass, blossoming trees and simultaneously naked trees with dry leaves left from the last year as a reminder that there was an autumn before the winter came.

I travelled with my mother, who always craves for warmth and sun in the winter and kindly supported the whole idea. After long and painful search for a place to stay, we chose a beautiful B&B that was situated just 3 km from the seaside outside of the city with clear air and wonderful surroundings. It turned out to be better than a 5-star hotels we could stay at. Every morning we stayed on veranda facing the sea, to get the morning sunshine. We looked at the mimosa tree in the garden to see whether it burst into flowers. It did a little bit more and more, every day. The goal this time was not to see more of the unique city of Barcelona, but to enjoy the calm peaceful time off from routine and cold in the middle of winter. Unfortunately, the lazy mood made me push the plan of making a photo session to the next day, until it was too late…. One day I caught a flu and was chained to bed… Thanks to the enormous care and kindness of our B&B hosts we survived until the departure (which until the end we were mentally ready to postpone). I spare the details here, as the memory is very fresh and I don’t really want to return there. To make the story short: magically, after 48h the fever was gone. And although I am still recovering, at least my head is clear and I am able to post something about my unusual winter trip to Spain before returning to the duties of working life.

Some cities look good on postcards, with tidy streets and well-preserved architectural heritage. You can walk and feel impressed with how beautiful and wonderful everything looks. Such city for me is, e.g. Madrid. But more *beautiful* to me are cities with an atmosphere. They may be shabby, with lots of old and forgotten places, cracked grey walls covered with the dust of time, large or small, sunny or wet… This summer I discovered Lisbon — one of the most *beautiful* cities I have ever seen!

I have never been to Lisbon before, and this is a short photo report of what and how I saw it.

From time to time I think about Swedish architecture. It is very different from what I am used to in Riga/Latvia. Apart of living in one of the most beautiful Baroque style towns (Karlskrona is known as Sweden’s only baroque city), I am surrounded by the “usual Swedish architecture”, which is falu red wooden houses. I must admit that I find them very charming, but not when you see too many of them. When driving through Sweden, I always wonder, why every place looks so similar to each other…

Recently I decided to make a post with pictures from Karlskrona islands and finally I have gathered a representative collection that will hopefully explain what I mean. Let me know, whether you find the red houses charming or boring 🙂

Note from Wikipedia: Falu or Falun red (pronounced “FAH-loo”, in Swedish Falu rödfärg (Swedish pronunciation: [ˈfɑːlɵ ˈrøːfærj])) is the name of a Swedish, deep red paint well known for its use on wooden cottages and barns.

For the past few weeks it was all about hockey. And yes, I am not fond of discussing the topic, when it comes to Latvians this year… They were climbing up the first three games, and dramatically falling down ever after. From the 6th place in the power ranking on May 8 they lost a series of games to the teams that have always been defeated, and finally were out before the quarter finals. I feel disappointed, but it does not stop me from watching more of hockey.

And true miracles do happen in ice hockey. Although not for Latvians this time.

They say “Hockey is Canada”. I have just finished watching the first game of the quarterfinals, and the all time favorite Canadians are out after a dramatic struggle for survival against Slovaks. Unbelievable. As the Slovaks sang their national anthem in glory, Canadians were completely paralyzed from the shock, an unexpected defeat, just about 2 min away from the end of the game…

After four years of blogging on web.mac.com, I was forced to move on. Unfortunately, Apple decided not to continue supporting iWeb (my all times favorite too). Although the site is still available, it won’t be moved to the iCloud, and won’t be updated either, since iWeb is not installable anymore.

This all meant that I needed to find a new storage place, and a new content management tool. Those who know how demanding I can be to designing and formatting, can imagine the requirements that I had, and how difficult it was for me to find an adequate solution that allows me to change as much as I would like to… In practice, however, it appeared to be impossible. Anything after iWeb feels and looks different, complex, user unfriendly,..

With the help of an old friend, Elvis, and the time during Agile Latvia 2012, a new site was registered and established. The coming few days were spent on changing the appearance schemes again and again, and moving the content. (I do not promise that the changes in the layout and design will not continue)… but hope that the new life for my website will encourage me to write again, and even regain the interest in photography. 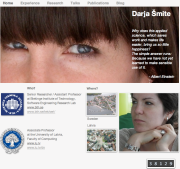 When writing yet another email from yet another airport a friend of mine made an observation that I almost live in the air. And indeed, my bags have not been unpacked for several weeks, and I am home only for 2 days before going away again. Out of curiosity I calculated the amount of time spent travelling in just this month. The results are quite shocking:
10 flights in November
10 h 25 min flying
15 h 25 min waiting between the flights
Not to mention several trips by car, trains and the waiting time associated with them. I am curious to calculate the total number of flights per year, but I better not 🙂
On the bright side, life in the air is always sunny 🙂 When thinking about living in the air, an old Latvian song came into mind… In summary they sing about the life behind the clouds.

Only a few weeks ago my clock stroke 262 974.383 hours and considerations about time started to occupy my mind. As we grow older, we start to notice that time runs faster and that apparently life is short. People often consider time unstoppable, unavoidable and uncontrollable. Some theories state that time is a fundamental objective quantity. Others consider that all is relative.

Recently I had a discussion with a friend, that the more events happen to us, the less time we have. I allowed myself to disagree with this statement, and then spent days thinking, whether my friend was right.
I tend to believe that, if well planned, a day can be divided into several intervals, each of which can represent a separate day. Sometimes I come from work and say: “my real Friday starts now!” (it can also happen on Mondays, Tuesdays and other weekdays too). And the more I do, the longer I perceive the day to be. Why do others think differently? Posting this question I turned to the all-mighty wikipedia.

First of all, I came across an interesting concept of temporal illusion called the kappa effect [coined by Cohen, Hansel and Sylvester in: Nature, 172, 901, 1953]. This effect is verifiable by experiment, in which a person taking a journey divided in two equal in duration parts, perceives these parts differently. The theory states that the journey that covers more distance will appear to take longer than the journey covering less distance, even though they take an equal amount of time.
My positive conclusion : do more, and you will have more than 24 hours per day!

At the same time, it is a common practice to grow plants under simulated sped-up lights. Several days per day, so to say. And these plants grow faster. My question is, whether by doing more we age faster?

A sad statistics that I found reveals that one hour to a six-month-old person would be approximately “1:4368”, while one hour to a 40-year-old would be “1:349,440”. Therefore this objectively measured time frame becomes much shorter as we age. Even though the measure of time is the same.
My negative conclusion: Do more, and you will age faster… exponentially faster over the years.
My positive conclusion: Nonetheless, by doing less, you will run out of time even sooner.

“Why does this applied science, which saves work and makes life easier, brings us so little happiness? The simple answer runs: because we have not yet learned to make sensible use of it” – Albert Einstein